Hello everyone! Again, I am lagging a bit behind on the blogging. But don’t worry; everything will be covered here eventually. Now as for this update I will take you through my second week in India, which was very different from the first week. A few weeks earlier I had started working with Triumph, doing some promotional activities along the way and New Delhi was the first big stop for that. In addition, I would be able to leave the bike at the Triumph workshop where they would fix her up for me.

The route for my second leg in India 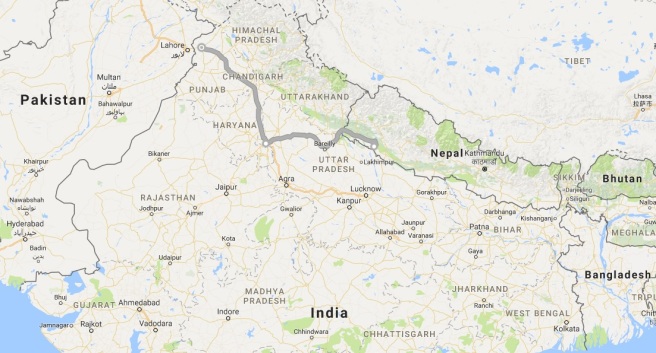 Day 90 – entering India for the second time: I left Bardia national park in the morning and continued heading west towards the Nepal-India border near a town called Bhimdatta. Now as I was down on the lowlands it was getting really hot, and the temperature quickly settled around 37-38 degrees before I had gotten very far. Otherwise, this day was mostly about a desperate hunt for fuel. I started the day with less than half tank and went on without any worries as I assumed there would be plenty of petrol stations along the road (being the main highway and all).

But apparently fuel supply in Nepal is a bit intermittent at the moment, so when I stopped at a station to fill up they kindly explained that they were out of petrol. No worries, I still had some 70km worth of fuel left in the tank and they said the next station is only 40km away. Half an hour later I pull up at the next petrol station. They are also out of petrol, but they say the next station is just 20km away and they might have some. They did not. And at this stage I had about 10km worth of fuel left (half a litre), with the next petrol station being 25km away…

Luckily, the shop across the road had a couple of plastic bottles with petrol so I could fill up two litres to keep me going (two litres gives me about 40km). And the day continued like this, for the roughly 150km from Bardia national park where I started to the border there was no petrol except for the odd plastic bottle some shopkeepers kept for the locals to top up their motorbikes. So the relief when I finally got across to India and could stop at a real petrol station and fill up a full tank of fuel was absolutely divine. After that I just went on the highway and made it half way from the border to Delhi before nightfall.

Day 91 – getting to Delhi and meeting up with the Triumph team: After a couple of short hours in the morning I reached Delhi in the middle of the morning rush hour… Which obviously I should have figured out beforehand, but I obviously wasn’t paying attention. So after wrestling my way through Delhi for two hours, averaging something like 20km/h in the 44 degree heat I made it to the Triumph shop. Only it was the wrong shop. There are two in Delhi and I had set my GPS to the wrong one. Well, they let me in (even though they were closed) and since I was dying from the heat I just sat there in this air conditioned heaven for an hour or so before I dared brave the heat and chaos of Delhi traffic again.

After another stint of excruciating heat and slow traffic I made it to the right Triumph workshop, and it was worth it! The workshop itself was brand new and state of the art and the team were super helpful. So they installed me in the waiting room overlooking the shop floor whilst they cleaned the bike and got everything organised so we could go through what needed to be done. It felt great getting some first class care for the bike after the beatings she had taken over the last few weeks.

Bike left in the safe hands of OneTriumph in Delhi 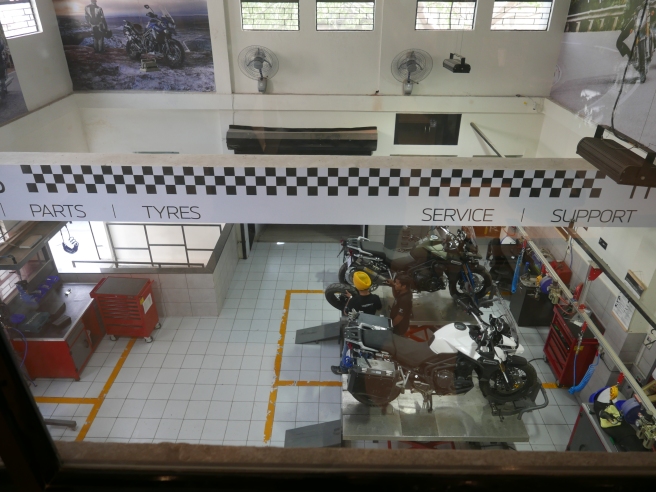 Once we were all done in the workshop, I took a taxi to my hotel for a quick shower before heading to the Triumph India head office to meet the team there. At the Triumph office I met with Siddhartha who heads up Triumph’s marketing in India, and together with their PR team we put together a plan for an event three days later on the Friday flagging me off from Delhi. It was really exciting getting to meet some of the Triumph team and I am really impressed with the India operation in general and the people in particular!

Day 92 & 93 – running errands in Delhi: The following two days were primarily spent running various errands in Delhi. I had a loan bike from Triumph whilst they were taking care of my bike, and I used it to go around town to check up on my bike, have some more meetings with the Triumph team and last but not least, visit the Iran embassy to sort out my visa.

Checking in on my bike at the OneTriumph workshop 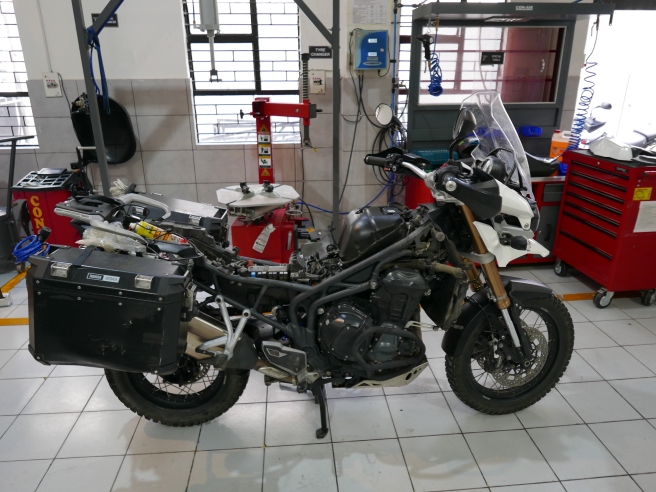 Over these two days, I spent what felt like the majority of my time at the Iran embassy. To begin with the embassy was in a different part of time from where I was staying, so each trip there took a solid 45-60 minutes one way. First I went there to pick up my visa which was applied for online by my friend in Tehran, only to wait around for an hour and then be handed a new set of application forms to fill out in addition to the online application. Then the next day I went back with all these forms filled out, waited for an hour or two only to find out that actually my online application had not yet been processed so I would have to wait a few more days for that. At this point I decided that getting a visa in advance was hugely overrated and I would just get one on arrival at the border.

Day 94 – becoming famous (well, trying anyway) in India: Finally, the big day when I would get my bike back and we would have the big event at the Triumph dealership (OneTriumph) in Delhi. I thought that maybe a couple of local motorcycle magazines and enthusiasts would show up, but it was much bigger than that! I spent the whole morning bouncing around the shop talking to bloggers, magazines, TV stations and motorcycling celebrities who all wanted to know everything about me and my trip. It was a fantastic experience and I had the privilege of getting to know some fantastic people in the process. But after a few hours it was time to be flagged off on my bike which was now almost as good as new.

Doing a TV interview at the OneTriumph showroom 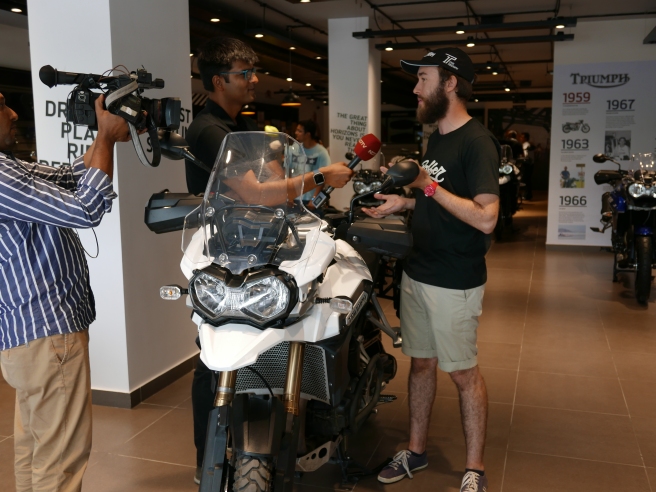 I didn’t go very far though, as it was midday in Delhi and way too hot to be riding a motorcycle. Instead I stayed at a nearby hotel and arranged with Siddharth at OneTriumph to head out early the next morning (before it got too hot) with him and a few other fellow Triumph riders.

Day 95 – leaving Delhi for Amritsar: I had not realised what getting up early means for local bikers in Delhi, but now I got to appreciate the concept in all its glory. The alarm was set for 3.15am and we set off a little bit after 4am, rolling through an almost traffic free Delhi just before dawn. It was a really nice and social experience to ride with some fellow bikers for the first time since Thailand, and we rode together about half way to Amritsar where we stopped for breakfast. Over breakfast we talked about the kind of things bikers talk about; bike rides, bike gear, tire choices etc – very stimulating! 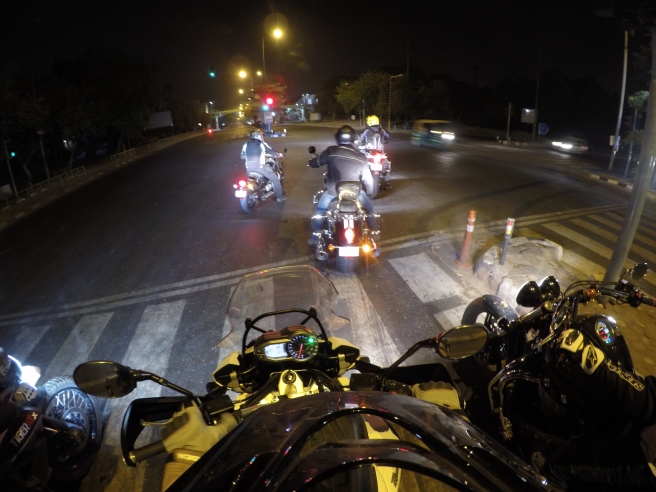 Stopping for breakfast half way to Amritsar 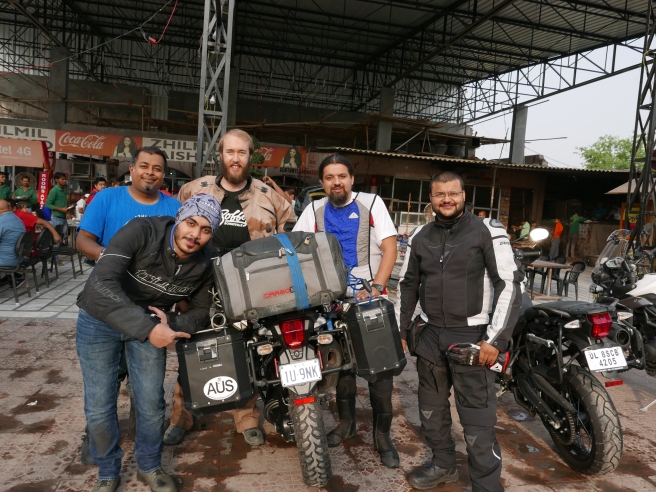 After breakfast I went on to Amritsar, where the weather blessed me and everyone else with some well deserved rain after a week of intense heat. So for the first time since I could remember I arrived at my destination without being soaked in sweat, an utterly delightful experience! In Amritsar, my dear friends Johan, Jonas and Emma had arranged for me to stay (and have a massage!) at the Hyatt as thanks for me hosting them in Melbourne earlier in the year, so I made my way there and treated myself to some excessive comfort for the rest of the afternoon and evening.

Doing some express sightseeing in Amritsar 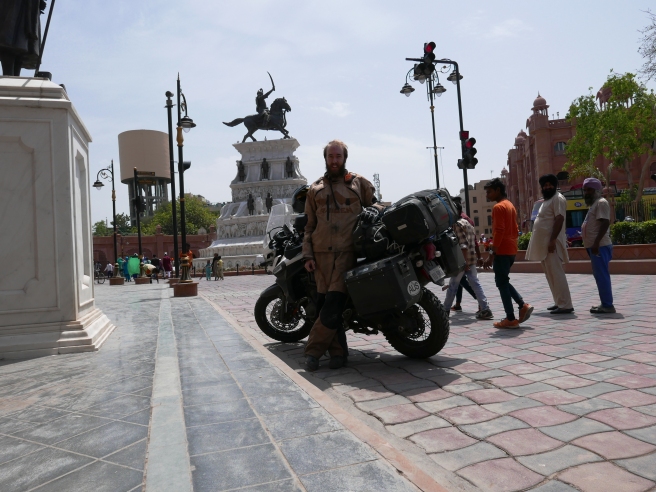 Before going to sleep I also made sure everything was in good order for my entering into Pakistan the next day, an endeavour which will I will cover in my next blog post!