As I am writing this, I have actually already left Java for Sumatra. For various reasons (as you will learn from my following blog posts) I wasn’t able to update the blog whilst on Java. But because eastern and western Java were such dramatically different experiences I will still split it over two blog posts. It will take us a few days to catch up to my current whereabouts but it will be worth it!

After leaving Bali my main destination on Java was Yogyakarta, the cultural capital of Indonesia and home of two famous temples: Borobodur and Prambanan. The other main attractions on East Java are volcanoes (primarily Bromo and Ijen) but since I have visited those before I decided to skip the volcanoes to save some time.

Day 30 & 31 – Making my way to Yogyakarta: Traffic starts picking up as you make your way across Bali and onto Java, so it ended up being two long days to get to Yogyakarta. On the first day leaving Bali I basically just stayed on the road until it got dark, and found somewhere to stay in a town called Jember. And the next day I left early (around 7am) and had a solid 11 hours or so on the bike to get to Yogyakarta. Not much to report other than that really.

Morning rush hour in Jember (video from my instagram, @on_the_scenic_route, check it out!)

Day 32 – Checking out the temples: This was a really great day. Not only the cultural experience of exploring the temples and colonial era city centre of Yogyakarta, but also the fact that I was staying in one place the whole day which meant I could leave all my luggage at the hotel and swoosh around the area with no luggage whatsoever on the bike. It was so light it felt like I was levitating through the streets.

First up was Prambanan, a Hindu temple complex built around the 8th century. I had a fun guide who explained all the stories behind each temple and the various Hindu gods they were devoted to. As expected it got very confusing very quickly. Many times I found myself thinking “Hmmm… is this actually a thing or is he just reciting the latest X-men movie now?”. Anyhow, it was a very impressive temple and I had a great morning exploring it.

And look at that genius ancient engineering to keep the rocks sticking together! 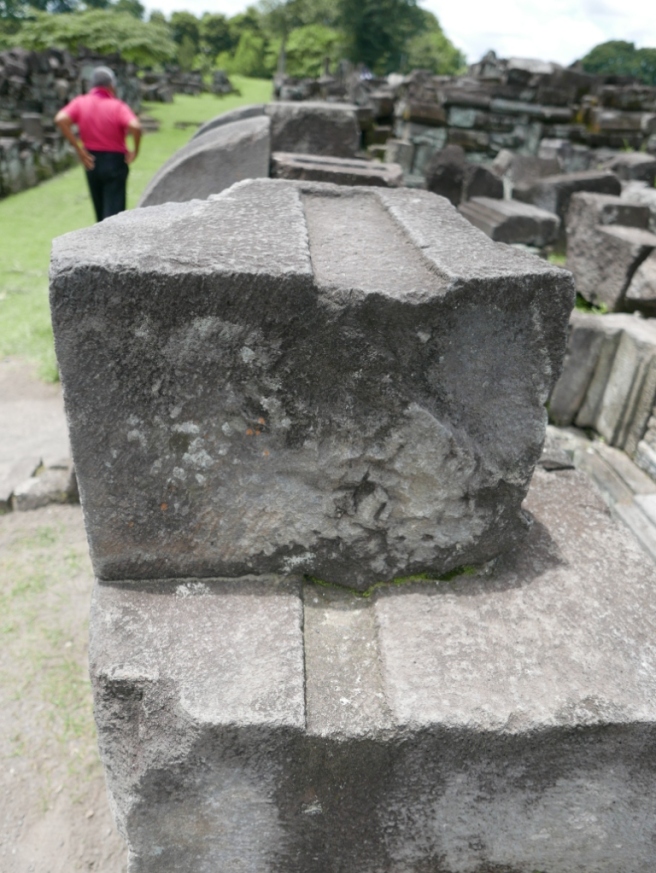 And this guy’s beard.

Next up was the city centre with lots of old colonial buildings and a really cool vibe. But on the way I decided to stop by my hotel again to put on some sunscreen and give myself a chance to forget my camera. Which I did. But feel free to google some photos 🙂

The final stop of the day was Borobodur, a Buddhist temple from around the 9th century and also the most famous temple in all of Indonesia. It was a bit outside of the city but I got there just after 5pm, in time for seeing the sunset from the temple grounds. Whereas Prambanan is probably the more architecturally impressive temple, the scenery around Borobodur is truly spectacular.

This is Borobodur, it doesn’t look as spectacular as Prambanan from the outside

I will end this blog post here, and get back shortly with the story (which will be very different) of how I got from Yogyakarta through the rest of Java.