Finally I am back on the road! Right now I am in Ubud on Bali, where I have had my first night in a nice hotel since I got to Indonesia (including my first hot water shower since late January. It was great. Truly sensational.).

Updating the blog from Ubud 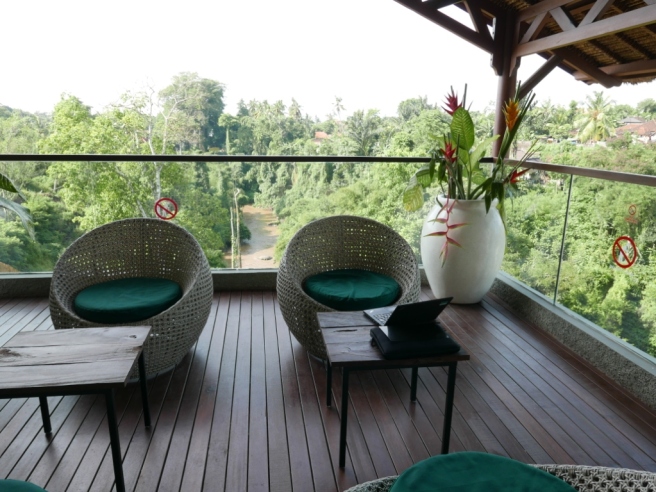 Those of you familiar with the geography of Indonesia will find it odd that I am on Bali, given that I said I was taking the ferry straight to Surabaya. Well. As with most plans in general, and plans in Indonesia in particular, the plan i presented in my last blog post didn’t survive even the slightest hint of contact with reality…

The first ferry to leave ended up being the one to Sape on Sumbawa (the one I was going to take in my very first plan), so I hopped on that one and then did a couple of long days on the road through Sumbawa, Lombok and Bali. More about that below.

My progress the last few days

Now I am off to Java, where I plan to make it all the way to Jakarta by Saturday night and fly over to Singapore and back to get myself a new stamp in the passport and another 30 days in Indonesia.

Day 24,25 & 26 – I found a friend: I realised that I forgot to keep my daily journal system going in my last post, so I’ll pick it up again here. You already know that these were the days that the ferry still didn’t run and the delay got past the point of messing up most of my plans. What you don’t know is that I found a friend!

Walking up the main street of Labuan Bajo on Thursday (after yet another visit to the harbour) I see a big motorbike with Australian number plates parked outside a guesthouse. I don’t see anyone looking particularly Australian around at that time, but on Friday night (Feb 10th) I see a very Australian looking guy on the street checking out my bike as I head out for dinner. His name is Richard and he is doing a similar trip (Australia to Europe) although he is going through East Asia and then Russia. But through Indonesia we are on the same route.

Me and Richard killing some time with bike maintenance 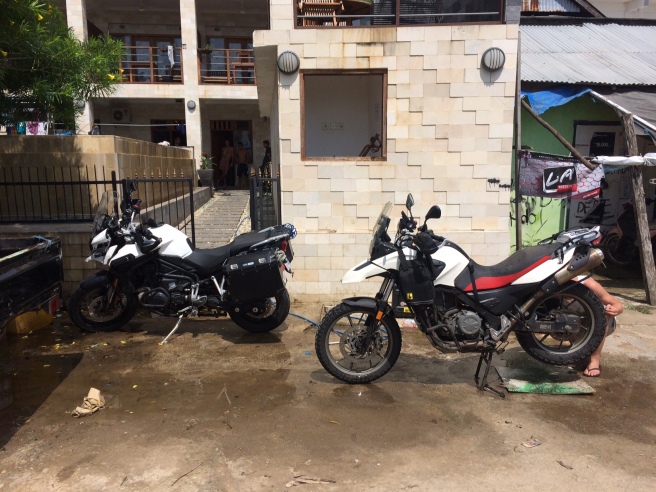 Day 27 – Finally leaving Labuan Bajo: Finally it’s Sunday the 12th of February, the day when the ferries are supposed to start running again. We (Richard and myself) head down at 7am to the terminal where the big ferry to Surabaya is supposed to leave from, but it’s still anchored off shore and the office is closed. Okay. Some breakfast and a nap and then it’s 9am. We try again. The office is still closed, ferry hasn’t moved.

Since we have nothing better to do, we head over to the other ferry terminal where the much smaller ferry to Sape is still sitting at the docks. The office is open (for the first time since I got to Labuan Bajo)! We head over to the counter and ask if the ferry is actually leaving today, “Yes, yes! Ferry leaving in one hour. Hurry, hurry!”. Richard and I have a very brief debate: wait for the big ferry to Surabaya to maybe leave today, or get on this one to Sape to at least get going. As my restlessness from being stuck is beginning to seriously impact my mental health, I argue for getting on the ferry to Sape just to get going. So we do. We head back to pack up our stuff and get on the ferry half an hour later. About 8 hours after that we arrive in Sape (the ferry took 6 hours, and an hour of random waiting to leave/dock on each side of that).

On the ferry, getting close to Sape as the sun is setting 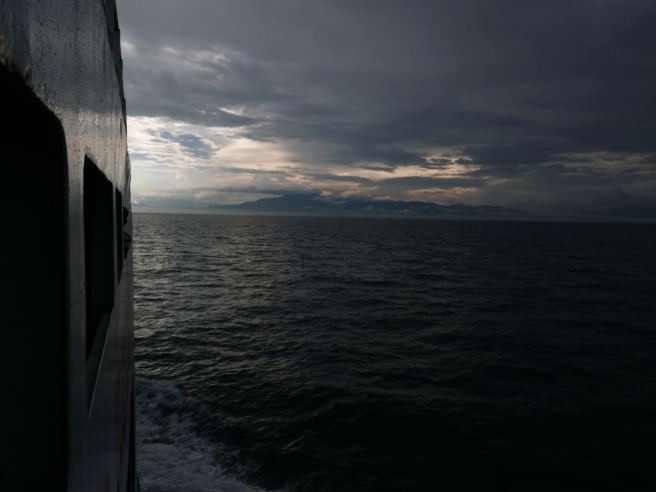 Day 28 – Crossing Sumbawa in one day: To make up some time, we decide to get going at 7am from Sape to make sure we have enough time to cross the whole island of Sumbawa (~400km) make the ferry crossing to Lombok (~1 hour) in one day. We had heard that the roads on Sumbawa are supposed to be really good, and they were! It takes us just over 8 hours to cross the whole island including stops for breakfast, mid morning snack and lunch, averaging almost 60km/h* (!!).

Despite being one of the longest days so far (leaving Sape at 7.30am, arriving in Tetebatu on Lombok around 8.30pm) it is a really good day. Feels great to be back on the bike and the weather is really good for most of the day. 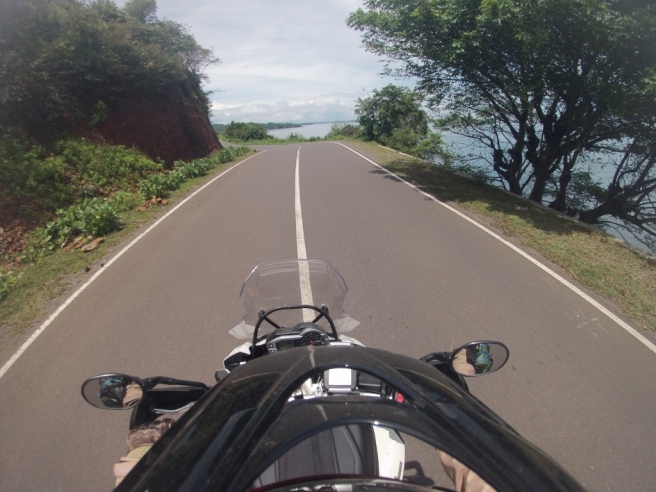 And a very normal traffic situation on Sumbawa (yep, that’s a horse cart) 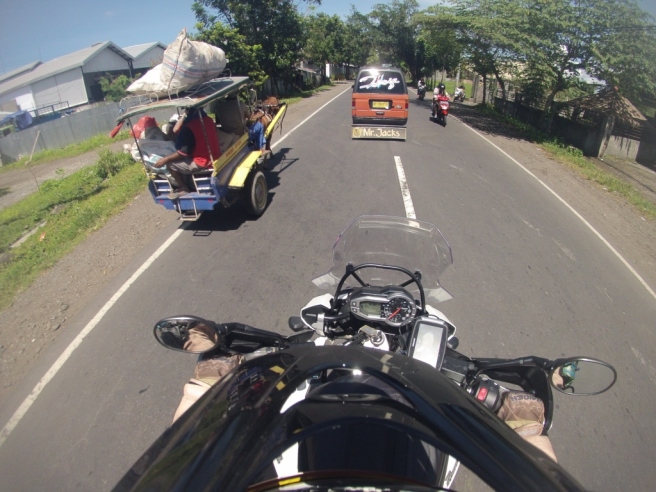 One of the highlights is being stopped in a police checkpoint half way through Sumbawa. We come around a corner and all of a sudden there is a line of cars and bikes just standing by the side of the road, with a police officer standing in the middle of the road waving people in. He waves us in as well. It looks like they are checking everyone’s licence and registration so I prepare to pull all my paperwork out from my bags. Then we get up to the officer actually checking everyone. He barely speaks any English, but he is very friendly and asks “Where going, where from?”. We say we’re from Australia, and on our way to Lombok. He puts on a huge smile, says “Hati-hati, kangaroo” (roughly “be careful, kangaroo”), gives us each a high five and then we’re on our way. No paperwork.

Day 29 – Getting to Bali: Getting from Lombok to Bali is really easy, both islands are quite small with great roads (again averaging ~60km/h). It takes us just under two hours to get from Tetebatu in the centre of Lombok to the ferry terminal, the ferry from Lombok to Bali goes every couple of hours or so and takes 4 hours (which of course is Indonesian for ~5-6 hours) and then it just takes another hour to reach Ubud. At this point you can also tell you’re getting close to the more popular parts of Indonesia because the ferry is full of westerners, many of whom are very interested in mine and Richard’s journeys.

Luckily the ferry is really more of a floating karaoke bar, so it’s lots of fun! 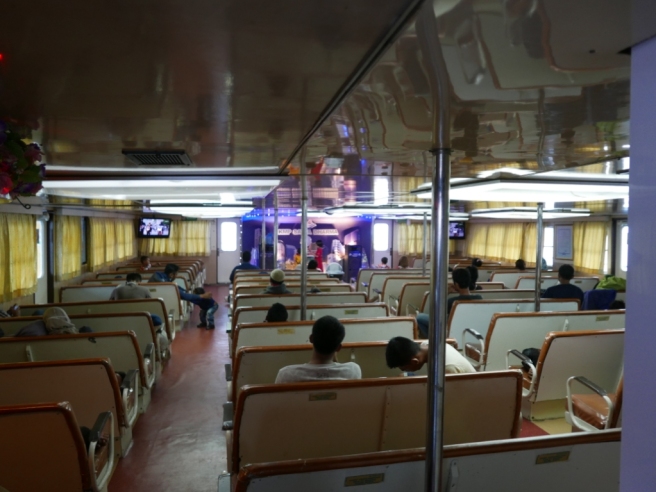 * A few observations on driving in Indonesia: As far as I have been able to make out, there is no such thing as speed limits in Indonesia (exception: schools, passing a school the speed limit is 25km/h). Instead, the maximum speed is naturally set by the condition of the roads and the intensity of the sensory experience that is driving in Indonesia.

All in all, this means that when you’re going through the mountains the roads are so windy you can rarely go faster than 40 or 50km/h and when you’re driving along the coast there is a limit to how much sensory stimuli your brain can process at any given time (stray chickens, cows and goats sleeping in the middle of the road, opposing traffic using your lane – like motorbikes overtaking a truck who is overtaking a horse cart). Doing 70km/h on Indonesian roads is much more intense than doing 150km/h through Australia.

One thought on “Hati-hati, kangaroo”