I’m now sitting by the beach near Maumere on Flores in Indonesia, taking a nice relaxing day after very intermittent sleep over the last 24 hours as I spent more than 12 hours on a ferry crossing over from Kupang and then another few hours driving through the night to get here. 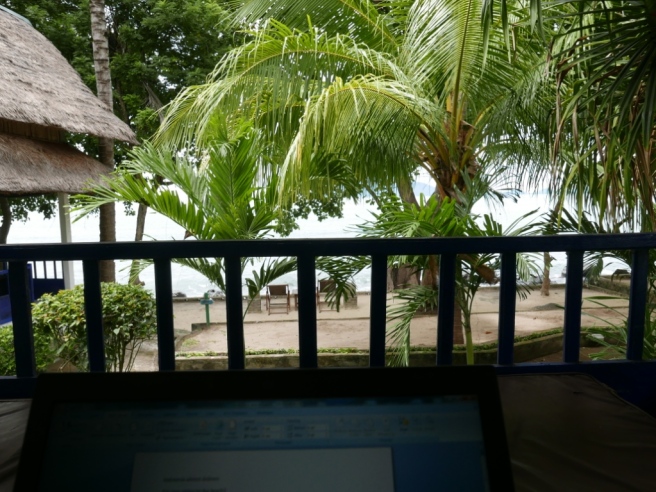 Near Maumere on Flores, which is this Island right here 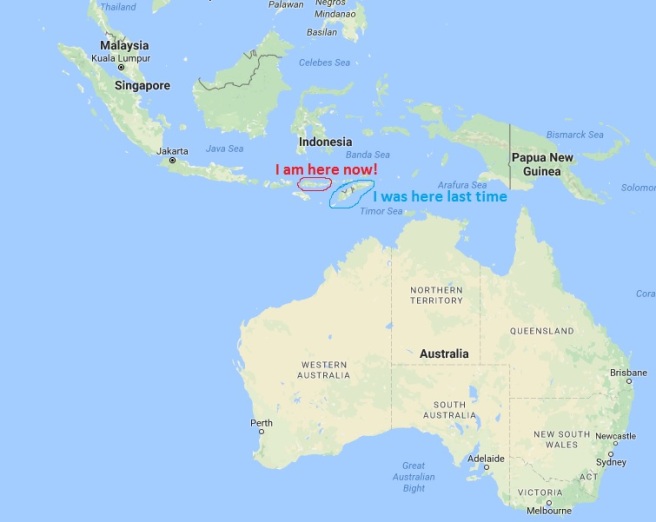 Day 12 – Getting to Kupang: Woke up early to get some things off my to do list in the morning (write the previous blog post, finally mount the GPS on my bike so I know where I’m going etc).

Since I was making such good time, and Kupang was only supposed to be a ~4 hour ride, I decided that I could just as well take the scenic route through the mountains instead of just going on the “highway” (highway in rural Indonesia doesn’t mean what you think it means, it’s basically just a road where two cars can barely meet, the only other difference from other roads is that they actually repair the road when it has been washed away in a landslide…) all the way to Kupang.

Anyway. The scenic route turned out to be a great and delightfully challenging idea. Spectacular scenery, some super fun locals who wanted to hang out and really, really, really bad roads. Great opportunity to hone my yet to be perfect offroad riding skills! 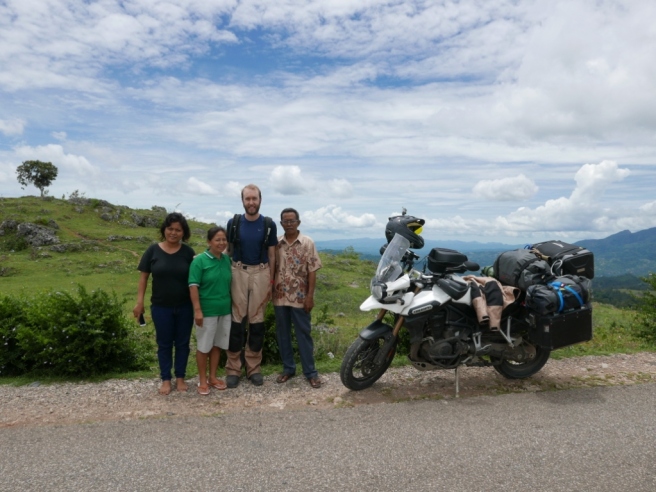 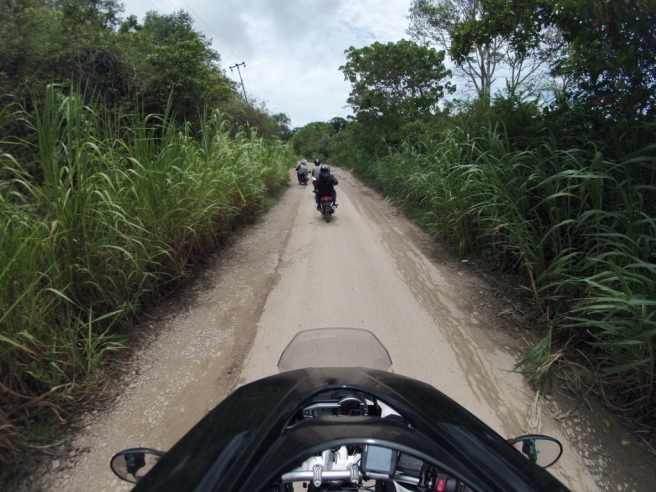 About 4 hours later, I actually made it to the highway and after another 2 hours I was in Kupang. I stayed at a hostel called Lavalon (where you should also stay if you ever visit Kupang) and spent the afternoon having a few beers and chatting to the super cool owner Edwin about my trip and his marketing strategy for his little hostel. 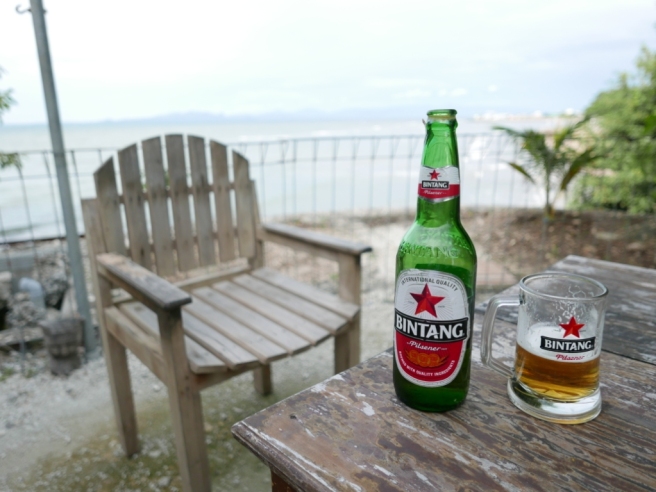 Edwin was a little bit confused as to why I had chosen this time of year (the rainy season) to cross Indonesia by motorbike, because “it rains all the time and the ferries don’t always go because of the weather” so I also got a chance to look up the word ‘ignorance’ in Indonesian… (Indonesia was part of my “it’s South East Asia, easiest place in the world to travel, no planning required” group of countries)

Day 13 – I’m on a boat: As I had decided to expect, my (unknown) gamble in the weather paid off and the ferry did go as scheduled on Sunday noon. So I squeezed the bike in with the other bikes and strapped it down and prepared for the 12 hour ferry crossing over to Larantuka (locking all my gear in or onto the bike, buying some water and rice with chicken for lunch). 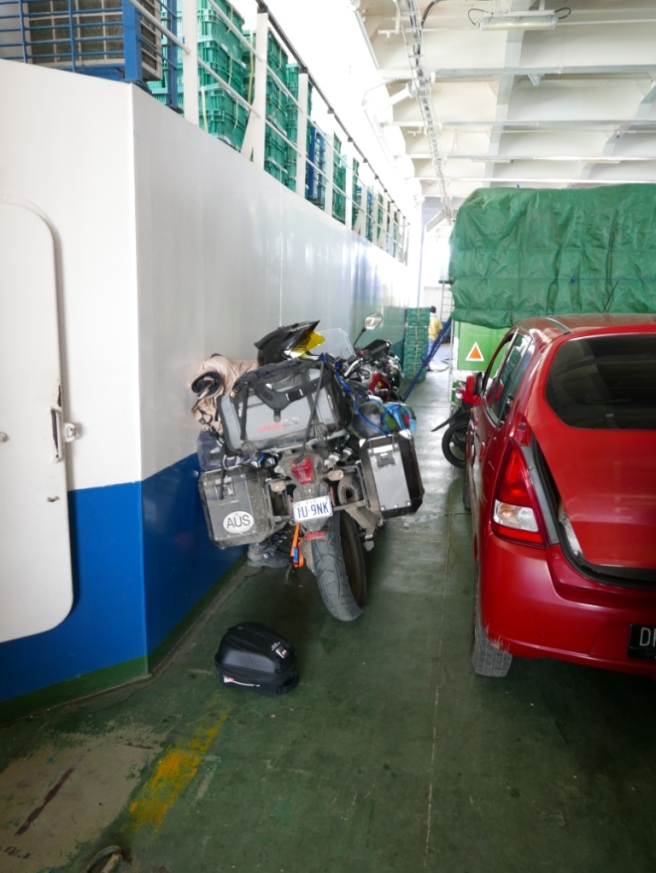 The next 12 hours was a combination of reading, napping and watching dolphins play next to the ferry. When we finally arrived around midnight, the tide was too high to unload the trucks that were blocking the exit ramp so while I was waiting on the car deck I started chatting to a nice local guy who just came onboard and who spoke decent English. Turns out he was the captain of a local “special police” garrison and had come with his troops to pick up some supplies shipped over from Kupang.

He was very amused by my trip, the inconvenient size of my bike and all my gear and in the end he convinced me to come with them to the next town (Maumere, 3 hours drive away) instead of staying in some shabby guest house in Larantuka where the ferry arrived. Even though it was getting close to 1am there was no arguing with his main point “It’s good. We use siren. Much faster”. Said and done, I rode the 3 hours from Larantuka to Maumere in the middle of the night in a caravan with my new friend in a police car and 6 of his troopers each on a police bike.

My riding crew for the night 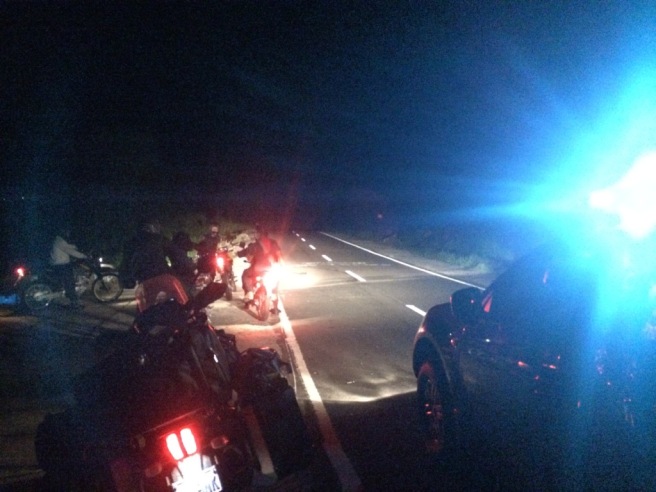 When we got to the guesthouse just outside of town that I had booked for the night the reception was obviously closed (it was 4am). But before I figured out what happened my new friend sent one of his guys over to the next door neighbour, woke them up and kindly asked them (kindly, yet armed and in a full black police uniform clearly designed to be intimidating) if I could nap on their porch whilst I waited for the guesthouse to open. That was fine, no problem at all actually. I apologised as best as I could for the inconvenience, but they seemed very amused about the whole thing so I didn’t feel too bad about it in the end.