As I am writing this from Alice Springs, I am officially more than half way through the Australian stint of my trip. This also means I will be treating myself to a bunch of luxuries today to celebrate:

The last few days have been quite interesting and a bit challenging, making my way through the desert, from Port Augusta to Coober Pedy and from there to Alice Springs.

Map of my journey so far: 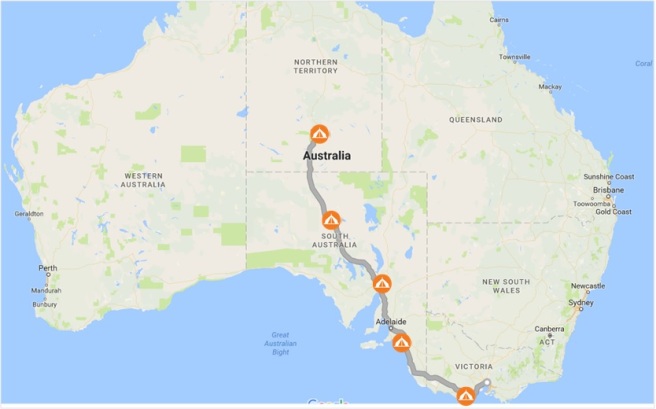 The ~1200km from Port Augusta to Alice Springs took me through what I believe will be the most desert like stretch of my entire trip. It pretty much looked like this the entire way: 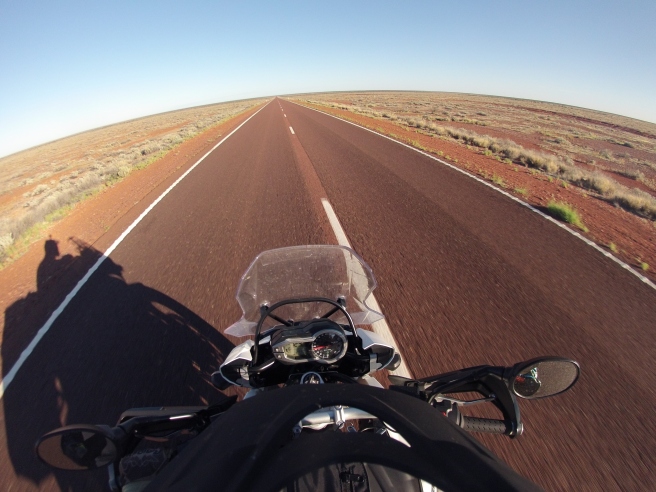 Day 4: I got up early in Port Augusta and by the time I had packed up my tent and camping gear I was able to hit the road around 8am. Using my general (and completely made up) knowledge about the desert I figured it will be cool during the night and morning, really hot around early afternoon and then cool down again in the late afternoon. So I had planned to do about a three hour run to a little town called Glendambo, have lunch and rest there and then do another three hours up to Coober Pedy in the late afternoon.

Turns out my general (and made up) wisdom about the desert was quite inaccurate. It basically gets unbearably hot really quickly (around noon) and then never really cools down until late late evening. I learned this by actually looking at a weather forecast and asking a local in Glendambo. I convinced myself that my home made desert wisdom is probably still valid for most other deserts, just that this one is different. Then I decided to fill up all my water containers and make a run for Coober Pedy straight away.

About an hour into the 3 hour ride the temperature stabilised at 38-39 degrees. Great. Very pleasant. My GoPro overheated and died (although I didn’t realise until I got to Coober Pedy) so I unfortunately don’t have many photos. It was all very warm. Luckily Coober Pedy turned out to be a bit of a desert metropolis, with all kinds of luxuries such as a supermarket, a pizza joint and a hair salon. And opals, but that wasn’t really my top priority. Plus the camping ground I stayed at had a swimming pool. Totally worth it.

Day 5: Having learned a thing or two about the desert, I got up even earlier and hit the road well before 7am to make it to Alice Springs about 700km north. The day went super smooth and the temperature stayed at or below 34 degrees the whole way. I hit the Northern Territories border a bit after noon and had a stranger take this really awkward photo for me. 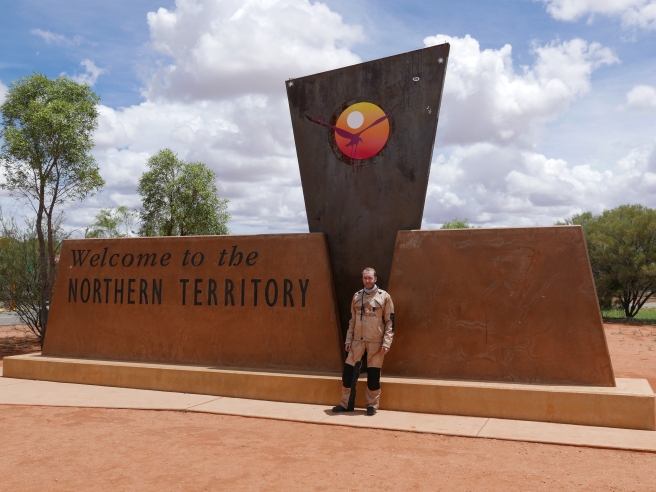 Then when I was about an hour from Alice Springs and this happened: 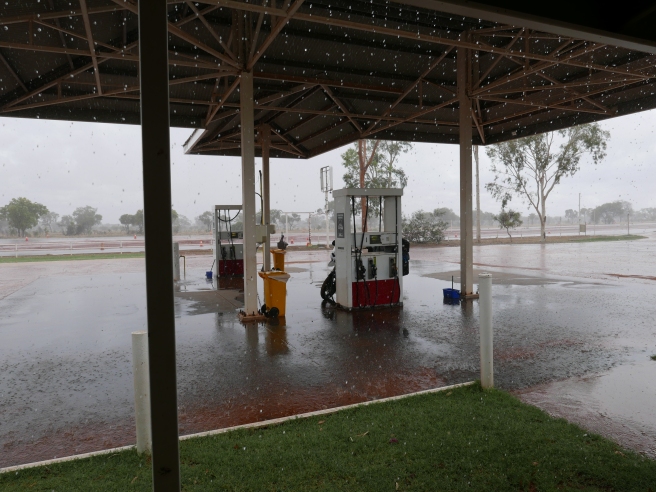 Well, great opportunity to try all my rain gear so I put some covers over my luggage and shivered through the last hour to Alice Springs where I decided the Hilton was probably a better choice than the tent…

3 thoughts on “Halfway through Australia”